Medicating to muzzle the messenger: The scourge of the modern woman 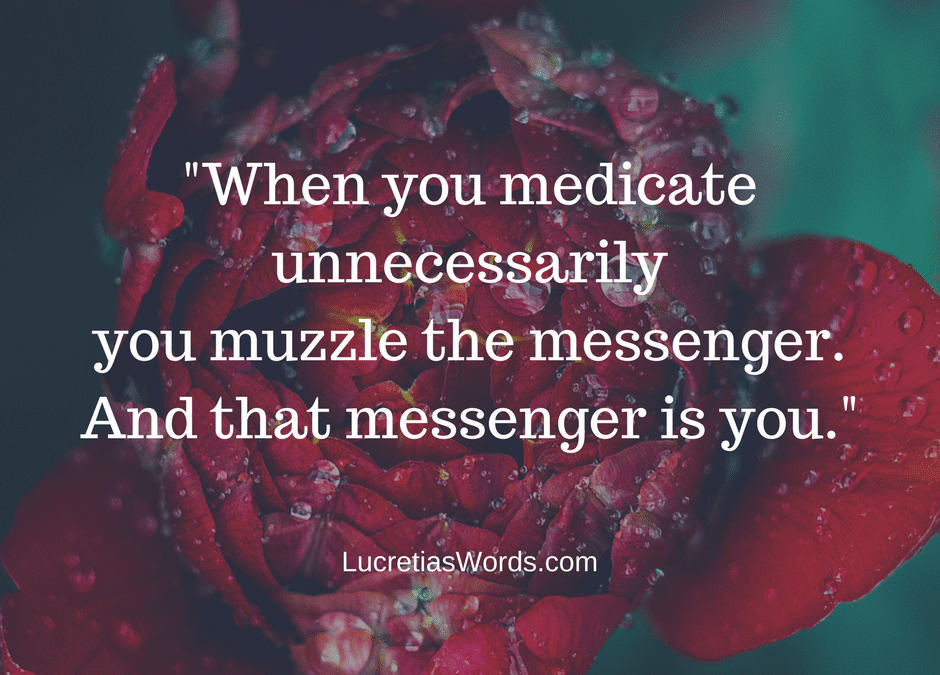 Today’s blog might be a bit controversial. I’m about to venture forth into a space I’ve only skirted around up until now. But I can’t stay silent about it any longer. I. Just. Can’t.

Because it’s getting worse and I’m seeing it a lot. Friends and acquaintances succumbing. Dropping like flies as we say in Australia. Their connection to self so broken that they will avoid their inner voice so they can just keep doing what they’re doing. So they can just keep going to keep everyone else happy; so they can maintain the status quo.

I’m not about the status quo. So I’m going to say it. And I’m sorry if it offends but it’s not my intention. Instead I just want to shine a light on something that’s getting worse. Here goes…

It’s Valium. It’s sleeping tablets. It’s the anti-depressants doled out like candy at the corner store. Women medicated to block out the sound of their soul whimpering to be heard.

I’m sorry if I’m being obtuse. Let me be more specific. Sometimes women are medicating themselves because it’s easier than standing in their power and owning their inner voice that is yelling for more. More than ‘this’ – whatever ‘this’ is for you.

Don’t get me wrong. I’m not anti-medication. I spent about a decade on anti-depressants in my 20s and early 30s. I saw psychiatrists and counselors at the same time. I was frequently a miserable, anxiety-ridden, tear-sodden mess. I had no idea who I was and I was sensitive to everyone else’s energy around me too. No one had ever shown me how to connect to my inner voice, the one that kept jumping up and down and causing all that anxiety because it wanted me to know there was ‘more’. No one ever told me that maybe I should ask if the feelings I felt were mine or were being picked up from the person next to me.

No one ever showed me how to trust my own judgement and then let the cards fall where they may.

So I was medicated. I chose it. Just like you’re medicated now. Yes, you; the beautifully gifted woman who is reading this blog post. I was you! I thought it was the best way, the only way to function, to be normal. And it did help, for a while. Kind of. But it wasn’t a long-term fix. It never could be. Not for me.

So what am I going on about then? Am I saying mental illness isn’t real? No, I’m definitely not saying that.

Am I saying that people shouldn’t take medication when they need it? No, I’m not saying that either. Sometimes medication is part of the solution that will keep you sane.

But when you have anxiety and you don’t sleep, I’m suggesting that maybe, just maybe, we’re culturally trained to be in too much of a hurry to muffle those emotions that are rising up and causing our disquiet.

When a woman tells me she wakes in the middle of the night for no reason because she feels like she’s forgotten something important and then, when it happens repeatedly for months, she medicates to block it out, I really feel there’s something wrong.

When another woman tells me her anxiety is out of control and her first response is to get medication to shut it up, but she’s not looked underneath to see what’s caused it, and she just wants to keep going because she ‘has to’, I really feel there’s something wrong.

When another one tells me her psychologist advises her not to meditate (which is simply the act of being present with yourself), I really feel there’s something wrong.

If we cannot ‘be’ with ourselves then there is a reason. And the reason in so many of the examples I hear is because women are not allowing themselves to ‘be’ with themselves. That disquiet we’re feeling, the anxiety that overtakes our minds and paralyses us is caused by our bodies trying to tell us something. It’s a response with a message and that message comes from deep within. It’s our soul telling us, ‘Hey, there’s something you need to look at here.’ Yet too often our response, our culturally-conditioned response is, ‘I can’t stop and listen to that voice. I can’t peer under those layers because I don’t have time. I have to keep going. I have to keep doing, doing, doing. I have to look after everyone else.’

It breaks my heart. It makes me angry. It makes me feel despairing. When our first recourse is to medicate rather than heed our inner voice, I believe that is a tragedy. Because your inner voice is worth listening to. It’s yours. It’s trying to tell you something. But when you medicate unnecessarily you muzzle the messenger.

And that messenger is you.