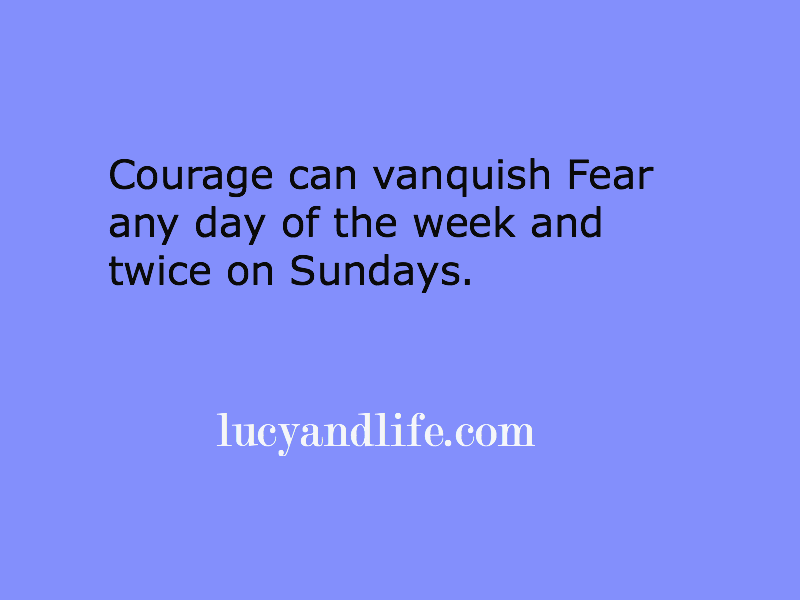 “You know, sometimes all you need is twenty seconds of insane courage. Just literally twenty seconds of just embarrassing bravery. And I promise you, something great will come of it.” Benjamin Mee, We Bought A Zoo.

The sponsor of today’s blog is Fear. I’ve known Fear for a long time now and I daresay he’d be pissed off to know that I’m using his name to bring my version of light and hope into the world. Nevertheless, that’s what I’m doing tonight.

I’ve chosen Fear because he’s a strong motivator. He is the motivator who creates…nothing. He’s the one who stops us in our tracks and prevents us going for what we truly want.

Often the only thing between you and that thing you want is Fear. Fear of success. Fear of failure. Fear of what other people will think. Fear of looking foolish.

I know Fear and all his versions intimately. Fear has circled my psyche for decades. He’s created cracks in my dreams and sucked my confidence many times. He’s insidiously perpetrated destructive crimes when I’ve least expected it and invited his close friends Procrastination and Self-doubt into my house when my back was turned.

He hides behind the furniture and jumps out, scaring the heck out of me. He also loves to lurk in those dark recesses of my mind that become a little too overactive late at night. Fear is a stalker who reappears just when I think he’s gone for good.

Sigh. I guess none of this is very uplifting, is it.

But here’s the thing. I’ve learned a lot about Fear over the years. Don’t get me wrong, I’m no more of an expert than anyone else. But there are two things I’ve learned after all this time.

Firstly, Fear isn’t worth a damn and you should never let him come between you and that thing you want. Go for it. Just try. Even the attempt will create something. It may be an outcome you didn’t even know you wanted. It could be everything you want and more. You won’t know unless you give it a go (should that be a bumper sticker??). Your attempt may even propel you past what you thought was possible and into something truly amazing that you never expected.

The second thing I know about Fear is this: most of the time he’s just there to f!uck with your head. Yes, I know it is also a protective mechanism, etcetera, etcetera. But seriously, most of the time it just wants to f!uck with you. Fear wants you to doubt yourself. Fear wants to stop you taking that step into the unknown. Fear wants you to stay right where you are because it’s safe (even if you are miserable in that place where you stand right now). That’s Fear’s job.

It takes Courage to look Fear in the eye and kick its backside out of the way. Courage must come from deep, deep inside you. Courage can’t be learned from someone else. Courage comes solely from you, and you alone. Courage resides in every single one of us.

Courage is an instigator and brings her two close friends, Change and Creation along for the ride. Courage can vanquish Fear any day of the week and twice on Sundays.

So my wish…no, my intention for the end of 2015, is to harness Courage. My desire is to take her hand and allow her to pull me through Fear (who is merely a hologram) so I can reach what I truly desire. I want to live fearlessly. I’m asking the Universe to help me with Courage for all parts of my life. I want her to seek out Fear wherever he hides and send him packing.

Am I nervous about this intention? Heck, yeah. But Fear has had the upper hand for far too long.